In the Siekierki district in South Warsaw, planned construction will destroy almost all the remaining green space, parks, garden colonies, and other wilder areas. Development in the area thus far has tended towards gated communities, with small fenced in lawns between apartment blocks. Planned construction includes an extension of a motorway into the area.

During Summer in Siekierki we hope to spread information of the proposed development in the area, to raise awareness of the privatisation and fencing off of once open and public spaces, the effect of such projects on rental prices and the lack of free social spaces.

We are planning to increase use of the Siekierki Gardens as a social space over the summer months with regular and diverse events. All events will be vegan and free.

Summer in Siekierki should serve as an introduction to people interested in urban and sustainable agriculture, wild foods and herbal medicines from those who have no experience to those who have and would like to share their knowledge. The project will also provide a chance to people interested in anti-discriminatory community and grassroots organising, and developing skills useful for this.

As well as that we want to introduce people to the value of the gardens as they have developed, containing many older fruit trees, wildlife and having the potential to reopen access to important features which have been slowly restricted over time (e.g. the main river Vistula flows some hundred meters from the Siekierki garden’s border). The garden areas are being reclaimed by nature and this process is an important part of healing the damage we do to the environment.

We will invite participants from projects in other cities in Poland and further afield. There will be events, workshops, open-days, skill-shares and presentations. If you would like to offer a workshop or activity get in touch. Stay tuned for more details… 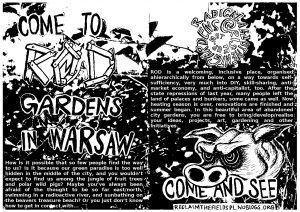